What Is Mobile App Localization And Why Is It So Important? 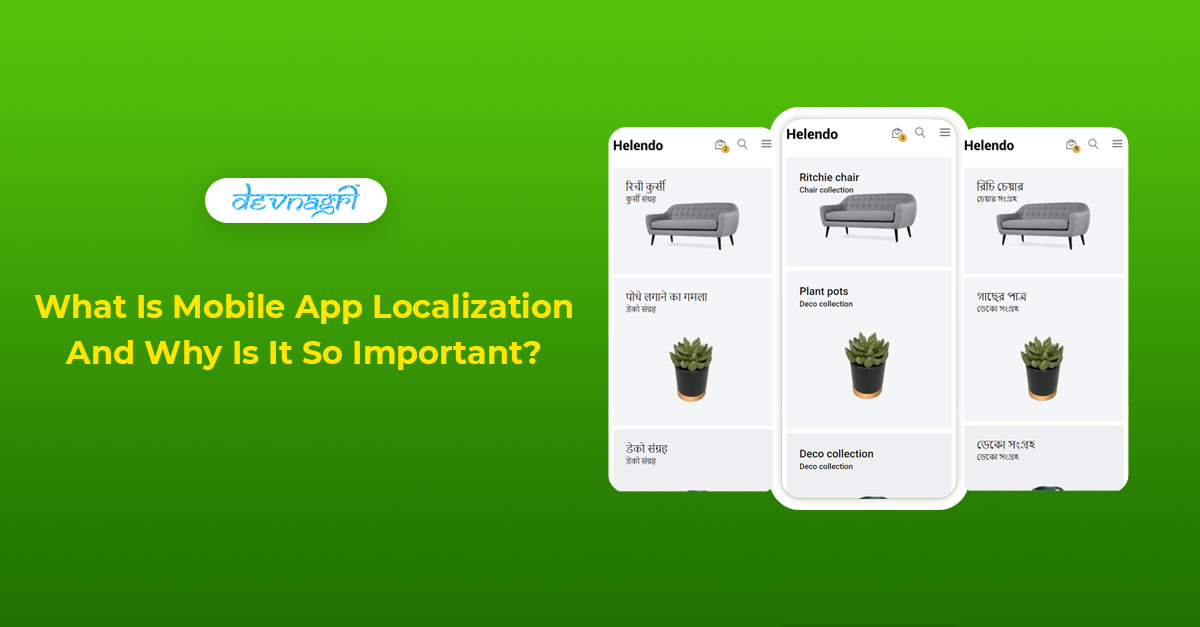 [:en]The inception of smartphones in the early 1990s, and their consequent glamorization by Steve Jobs in 2007, has irrevocably transformed the world. The boon of technology has breezed past people’s lives from every nook and corner of the world. However, there remain very few human civilizations untouched by innovations and gadgetry. Contemporary times are marked by an unabashed dependence on technology, especially phones. From shopping to learning to entertainment, the technological voodoo of ‘smart’ gadgets has enraptured everyone.

With the advent of smartphones, several ancillary entities also rose to prominence, and the most vital among them is mobile applications. Referred to as ‘apps,’ a mobile application is computer-based software designed to operate and run on a phone or tablet. Initially intended for functions related to mails, calendars, and databases; the aura of ‘apps’ has encapsulated every domain imaginable. For example, some apps exist to remind users to drink water, apps that help count calories, or hi-tech gaming apps compared to Sony Play stations.

Also Read : How Mobile App Translation Can Do Wonders For Your Business?

Furthermore, apps have become successful business trajectories effectively utilized by companies to steer ahead in the market and earn more clients. Statistics reveal that the total mobile application downloads in 2017 were 178 billion, increasing to 204 billion by 2019. The staggering figures are a clear illustration of the popularity and ubiquity of apps and smartphones.

A closely related phenomenon that is taking the entire world by storm is mobile apps translation. Experts assert that translation is the future of the mobile app industry as more and more netizens now expect content in their language. Furthermore, users are more likely to delete an app immediately after download if it is not in their local language.

Also Read : An Indian Language Translation is Full of Benefits

It is a fabulous time to engage in business ventures and embark on novel endeavors. One of the foolproof ways to forge a towering position within any realm is through localization and translation. The App Store is available in 150 plus nations in 40 languages, so the scope of expansion is phenomenal and all-encompassing.

A study shows that the Chinese internet user base is the most significant contributor to global mobile apps revenue, followed by India and the United States. Although the English language enjoys a hegemonic position in professional and virtual lexicons, we can see considerable shifts and vivid realizations about the vitality of regional languages in cyberspace.

The Basics Of Mobile App Localization

Mobile app localization is adapting an app and its app store listings to cater to diverse geographical locations and target audiences. Localizing a mobile app is intrinsically linked to its growth and expansion. It enables an app to reach more people and makes it relatable and appealing to foreign audiences. If you are looking for mobile app translation, opt for an agency with credible certification and expertise in the field.

The primary objective of an app developer is to increase the app’s visibility and exposure, and effective localization is the optimal method of achieving these crucial goals. Furthermore, translating an app to match specific locales’ linguistic and socio-cultural tastes profoundly increases its MAU (monthly active users), thereby increasing revenue.

It is noteworthy to highlight that mobile app localization helps break linguistic barriers and enables the developer to fully utilize the socio-political and cultural nuances of a region to the best possible extent. We can gauge the importance of mobile app translation because localized apps result in 128 percent more downloads per country and a 26 percent increase in revenue for each country.

Thus, a vast vernacular terrain is available for effective utilization by app developers. In case you are on the hunt for mobile app translation services, positive reviews, transparent policies, and accommodative practices are a few of the things you should be looking for.

Studies show that localizing an app leads to exponential increases in downloads and brings in more revenue. A 30 percent boost in revenue per country is associated with optimal app localization. Furthermore, utilizing the App Store optimization stratagem is the best way to ensure that downloads are increased, and the translated app reaches the target clientele.

The app industry is characterized by fierce competition with new applications every hot minute. The appropriate technique to stay a step ahead of the rest is via localization. Studies say that if a netizen deletes an app in 90 percent of the cases, there remains a very faint possibility for re-downloading. Hence, it is better to be safe than sorry and engage in mobile app translation services.

Another unique advantage of localizing an app is enhanced visibility and repute. Prestige and esteem are the attractive by-products of investing in localization. Therefore, it is imperative to consider app localization from the beginning and plan it as a necessary step for the future.

Although localization entails costs that, at times, may seem cumbersome, it is a process that guarantees increased ROI (return on investment). If you are looking for app translation, don’t go overboard and run after full internationalization. Conducting comprehensive market research is the best method to underline the regions that show an immense demand for your service or product.

Also Read : From App Translation to Website Localization The Vitality of Local Influences in the 21st Century

Mobile app localization is essential to polish a brand’s image globally. Due to infallible localization, gaming apps like Pokémon Go and social media applications like Instagram and Facebook have become worldwide sensations. However, numbers do not lie, and they reflect that 41 percent of global app revenue comes from Asia, followed by North America (31 percent) and Europe (23 percent). Therefore, catering to the non-English speaking Asian and European areas becomes paramount.

If you want to hire mobile app translation services, please consider all the details of the agency before making a final decision. First, mobile app localization requires practice, and the second time is always better and more profitable than the first time.

Thus, the legroom for expansion increases as one demarcates territories and tweaks the app to match them. Second, maintaining and understanding any region’s cultural integrity and traditional practices is the key to successful localization.

Lastly, if you opt for app translation, ensure that the agency is not simply converting the images and texts but also localizing the keywords and metadata. Such holistic alteration calcifies the discoverability of the app and exposes it to a broader audience.[:]