Translation vs Transliteration: What’s the difference? 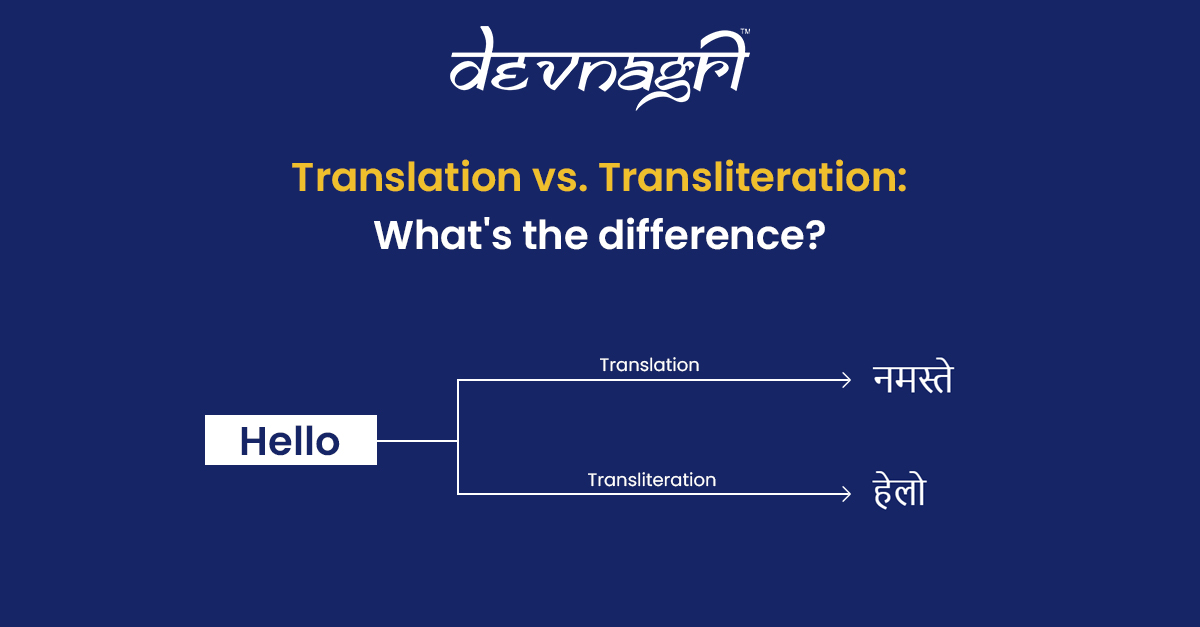 Transliteration helps us to pronounce words in another language whereas translation gives us the meaning of words. Transliteration changes the words from one language or alphabet into another corresponding, with similar-sounding letters with different characters.

For example, the word for the festival of lights holiday in Hebrew is חנוכה. When we transliterate the word into English it becomes Chanukah or Hanukkah. In Hindi, the transliteration is chaanooka or hanuka.

Transliteration can also be done in more than one way. Many languages, such as Nepali and Hindi use a Devanagari, Bulgarian and Russian, use the Cyrillic alphabet, while the Kanji script is used by Japanese. Transliteration changes these words into Latin alphabets but does not translate their meanings.

Latin alphabets are used in some of the most used languages around the world, including Spanish, English, Hindi, French, and German.

If the words ‘Good Evening’ aren’t transliterated to Simplified Hindi (namaste) using Latin alphabets, Hindi letters (नमस्ते) can be challenging for any person but a Hindi speaker to understand. Those of us who like exploring Hindi and other indigenous languages of India-speaking countries should be grateful that transliteration exists!

If you go to an Indian restaurant in London, you often notice that their menu isn’t written in English, but you can roughly guess the meaning. For example, shoraba or maans. If “maans” was written in Hindi characters (मांस) you would have no idea what those characters meant unless you were a Hindi speaker. Hindi restaurants help their customers by providing a transliteration of the Simplified Hindi script into Latin letters to help you understand their menu.

Also Read: Subtitling Vs. Dubbing: What is The Difference?

Using transliteration and translation in the same document:

Translation frequency: Do you want your text to read like an English-only text? Use transliterations sparingly and stick primarily to the translation. Do you want readers to feel like they’re reading bilingually and getting a feel for the non-English words? Use transliterations more freely. Once you choose an approach, implement it consistently. For example, you may decide that a transliteration is translated the first time it appears in an article, but not in subsequent appearances of the word within that same article.

How to use transliteration:

If you’re working with materials that include transliterations, you may discover that attempts to limit mayhem of grammar, spelling, and formatting can thwart the most devoted of wordsmiths. If you’re transliterating from a language that does not use the Latin alphabet, you may find that transliteration rules can’t be universally applied; one enthusiastically aims for consistency but finds it is the hobgoblin of literary minds.

Also Read: Is Website Translation Important For The Fintech Companies In India?

Below are some key issues and considerations when making your transliteration writing and formatting decisions:

Character formatting: It may be helpful to italicize transliterated words. While it’s cleanest to keep the character format simple, those of us who dislike italics may opt to use them anyway once we discover a worse alternative: the terror of perpetual quotation marks.

Letter mapping: If you’re dealing with a language in which multiple letters make the same sound, you will need to decide how to transliterate each of the letters into English. For example, in Hebrew, you might decide to mark the letter het and the khaf as kh, which makes the same guttural sound, as h.

Titles: Do you want transliterations in titles? If your transliterations come with a particular format, such as parentheses, italics, or quotation marks, they may be too unwieldy. You may decide to use English-only titles.

Popularized Spellings: Once you adopt a letter mapping approach and apply it consistently, you run into a problem, coping with accepted spellings. For example, if you’re transliterating names of popular concepts, foods, cities, or common spellings exist and the question becomes whether to “insist” on the consistency of common usage or bow to house style. In many cases, you simply cannot cross the spelling that is used, for example, in a city’s literature.